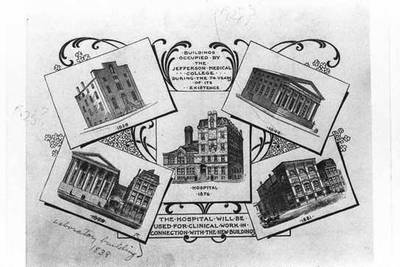 A collage of drawings depicting "Buildings occupied by the Jefferson Medical College during the 74 years of its existence." All four drawings in each corner depict the same building, Medical Hall (Ely Building) in its many guises: upper left, as it originally appeared in 1828; upper right, in 1846 after renovation with Grecian facade; lower left, in 1879 with adjoining Laboratory Building; lower right, in 1881 after renovation with Victorian facade. In the center is a drawing of the 1877 Hospital Building on Sansom Street. Caption below reads, "The Hospital will be used for clinical work in connection with the new buildings."

2 copies. Both have handwritten annotations.