Those who Give: The Kristen Olewine Milke Breast Cancer Research Fund 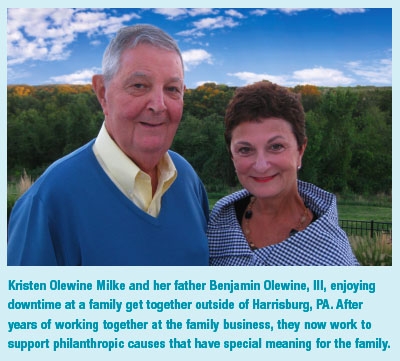 When Kristen Olewine Milke, a Harrisburg native, was diagnosed with breast cancer in 2003, she sought the best place to have her surgery. Her nephew, a surgeon at Memorial Sloan-Kettering Cancer Center, told her she would receive excellent care at Jefferson, and she soon became the patient of breast surgeon Dr. Ronald Weigel (currently the Head of Surgery at the University of Iowa) and Clinical Associate Professor Steven Copit, MD, who performed her reconstructive surgery.

“I became very close to the doctors who treated me,” says Ms. Olewine Milke. “This was before the Breast Care Center had been formalized, but I received that same thoughtful, coordinated care—where the oncologists, surgeons, chemotherapy treatments, and nursing care were all seamless. I realized I wanted to do more, to have an impact on others’ lives.”

Ms. Olewine Milke learned about the breast cancer research that Dr. Weigel was then doing, a role assumed today by Susan Lanza- Jacoby, PhD. Her work includes investigating the possible role of diet as well as nonsteroidal antiinflammatory drugs (NSAIDs) like aspirin and ibuprofen on reducing the risk of breast cancer. “I am deeply honored that Kristen continues to support surgical research, seven years after she became my patient,” says Dr. Copit. “Her generosity will affect how we treat breast cancer patients in years to come.”

“It’s great to be able to support the ongoing research in the department,” she says, “especially given how hard it is for researchers to find funding today. I don’t have the skills to be a researcher myself,” she continues, “but it seems only right to try to help, out of gratitude for the good care I received.”

Ms. Olewine Milke and her father, Benjamin Olewine, III, work together to support philanthropic causes that have special meaning for the family, including children’s medicine, wildlife conservation, education and the arts. Over many decades, Mr. Olewine transformed the Harrisburg grocery store his father had started into a food distribution company that was ultimately bought by the Sysco Corporation. He turns 89 years old in October and continues to go to the office each day. Ms. Olewine Milke was Senior Vice President of Sysco Food Services of Central Pennsylvania until 2005, when she retired to devote herself full-time to philanthropic work.

Jefferson is still involved in Ms. Olewine Milke’s care seven years later. “Were I to need surgery again, I would seek out Dr. Copit first and foremost,” she says. “In the mean time, I’m glad to support Jefferson in seeking the best possible ways to meet the needs of breast cancer patients.”

For additional information about planned giving, or to make a contribution to the Department of Surgery, please contact Lara Goldstein in the Jefferson Foundation at 215.955.8797 or email lara.goldstein@jefferson.edu