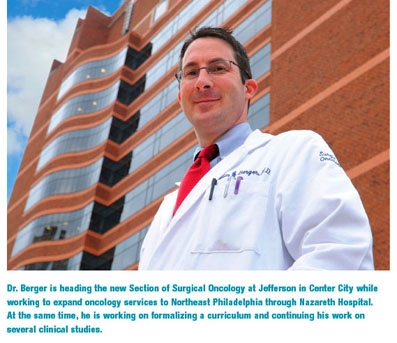 Dr. Berger is taking on this latest administrative challenge in addition to his ongoing clinical, research and educational responsibilities. His efforts have not gone unnoticed. As a Cancer Liaison Physician at Jefferson, Dr. Berger recently received an Outstanding Performance Award for going above and beyond the scope of the normal duties of serving as a liaison between the Hospital’s cancer program and the American College of Surgeons Commission on Cancer.

As Section Chief, Dr. Berger’s first task will be formalizing a surgical oncology curriculum for medical students and residents. Jefferson will also be applying for an NIH T-32 training grant to allow one surgical resident to be more formally trained in oncologic basic science for two years during his or her residency. Dr. Berger will be a co-investigator on this grant.

In addition to his clinical and educational responsibilities as Section Chief, Dr. Berger is the Principal Investigator (PI) for a number of national and international clinical studies. As a surgeon, Dr. Berger feels a responsibility to encourage his patients to enroll in clinical trials. “We are often the first doctor that a patient sees after his or her diagnosis, and we form a strong bond,” he says. “Part of my role is to advise my patients and emphasize the potential impact of their involvement in clinical trials for cancer research.”

One such trial is a randomized trial of two surgical techniques for pancreaticojejunostomy (connecting the pancreas to the jejunum) in patients undergoing a Whipple procedure, to treat cancerous tumors of the pancreas. “There have not been a lot of randomized prospective trials on these techniques,” says Dr. Berger, “This is the largest study to date.” So far the technique that favored invagination of the pancreas has resulted in fewer pancreatic leaks and fewer adverse patient outcomes. Dr. Berger presented this research at the Annual Meeting of the Southern Surgical Association in 2008.

A second trial for which Dr. Berger is a PI studies the use of a new drug– ZD6474– in combination with chemotherapy and radiation prior to surgery for patients with esophageal cancer. Dr. Berger conceptualized and designed the study in consultation with AstraZeneca. “Most trials report a pathologically complete response rate of about 20 percent,” says Dr. Berger. “So far, five out of eight patients (63 percent) in our current trial have had pathologically complete responses–meaning the tumor has been entirely eliminated–which is very encouraging.”

Dr. Berger is also a surgical co-investigator for a multi-institutional trial through the Radiation Therapy Oncology Group, the first Phase III trial to compare the effects of chemotherapy and radiation versus chemotherapy alone for pancreas cancer patients following surgical removal of the head of the pancreas. “Unlike in the United States, European physicians tend to think the combined treatments are worse for the patient’s long-term survival and quality of life,” says Dr. Berger. Approximately 900 patients will be enrolled, in Europe, Canada, and the United States. “This study has been a long time in the making,” says Dr. Berger, “but the results will be groundbreaking for how we treat pancreatic cancer.”