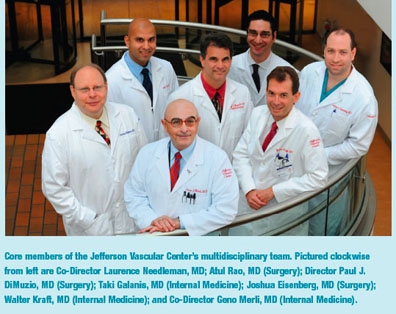 Since the Jefferson Vascular Center was launched in July 2009, this comprehensive program has been co-directed by Paul J. DiMuzio, MD, FACS, the William M. Measey Professor of Surgery and Director of the Division of Vascular and Endovascular Surgery. The co-directors are Geno Merli, MD, Senior Vice President and Chief Medical Officer of Thomas Jefferson University Hospital (TJUH), and Laurence Needleman, MD, Associate Professor of Radiology and Director of the Division of Abdominal Imaging.

“The Vascular Center brings these specialties together under one roof for patients with problems affecting the arterial, venous and lymphatic circulatory systems,” says Dr. DiMuzio. “Patients can get a surgical opinion, have a noninvasive vascular study, be cleared preoperatively, and have a medical evaluation of an issue that doesn’t require surgery—all in the same day.” Other programs offer these services, he says, but are rarely organized under one roof in a way that creates a seamless experience for the patient. “Our patients receive state-of-the- art care quickly and efficiently,” Dr. DiMuzio says, “from a team of nationally and internationally recognized leaders in vascular care, research and education.”

From an arterial standpoint, the center specializes in carotid artery disease, aortic aneurysm and dissection, and the minimally invasive treatment of lower extremity atherosclerosis. The physicians also evaluate and treat all forms of venous disease, including performing minimally invasive procedures for varicose veins right in the office as well as comprehensive evaluation and management of thrombotic disorders. Additionally, the center includes a comprehensive, on-site wound care program centered on hyperbaric oxygen therapy.

The center’s team of physicians currently sees close to one hundred patients a week, and for the past year Dr. DiMuzio and Joshua Eisenberg, MD, FACS have performed roughly 80 vascular procedures a month. The center’s capacity has expanded even further with the recruitment of a third vascular surgeon, Atul Rao, MD, in August 2010.

“The full implementation of the Electronic Medical Record (EMR) system has been a tremendous asset as well,” says Dr. DiMuzio. “We can handle a higher volume of patients and patient satisfaction has been excellent.” The facility, located on the sixth floor of the Gibbon Building at Jefferson, houses the offices of all six physicians, eight exam rooms, three fully equipped ultrasound rooms, and the hyperbaric oxygen unit. Dr. DiMuzio adds that “the difference it has made in our patients’ experience is quite noticeable.”

Read more about the Jefferson Vascular Center at http://www.jeffersonhospital. org/JVC