What Makes A Surgeon of Choice: Dr. John Maxwell 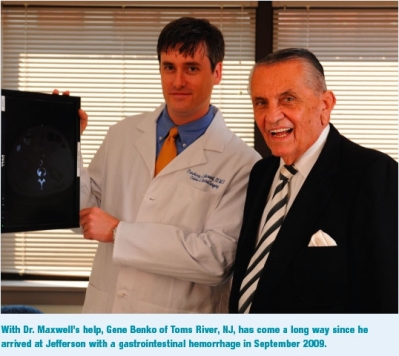 “People did the same for me in my training,” says Dr. Maxwell, “and I feel it’s my responsibility to give back as much as I can.” A South Carolina native, Dr. Maxwell was fellowship-trained at Jefferson; he earned his medical degree from the Medical University of South Carolina and completed his residency at Louisiana State University in New Orleans. His daughter was born two days before Hurricane Katrina, and he spent the next two years working in the heart of “Cajun country” in Lafayette, Louisiana.

“That’s where I began to see the subtle differences in caring for patients in a community setting as opposed to a large urban center,” says Dr. Maxwell. He is now helping expand the Jefferson colorectal surgery practice to Methodist Hospital, a community-based hospital in South Philadelphia. He spends a day there each week in the OR and on endoscopic cases, and trains medical students on the Methodist rotation. For another weekly half-day, Dr. Maxwell offers prophylactic colorectal care in an office setting at St. Agnes Medical Center, also on South Broad Street.

Dr. Maxwell knows only too well that colorectal surgery can be a matter of life and death. Gene Benko, 72, came to Jefferson in an ambulance from Toms River, NJ, in September 2009 with a massive lower GI bleed. “I was in such critical condition that a priest came twice to read me my last rights,” recalls Mr. Benko. He interviewed three medical teams when he arrived at Jefferson before choosing Dr. Maxwell, “because he was young, and energetic,” Mr. Benko says.

Ultimately Dr. Maxwell needed to perform a laparoscopic total abdominal colectomy. “He was there when I woke up,” says Mr. Benko “with the good (and bad) news” that he had been able to stop the bleeding and save Mr. Benko’s life, but removing the entire colon required an ileostomy—a procedure that brings the intestine to the surface of the abdomen, to emit intestinal waste. “A small price to pay to be alive,” says Mr. Benko.

Three months later Dr. Maxwell performed another surgery to close and reattach the intestine. Despite some complications, which required a third procedure, Mr. Benko is extremely grateful for the care he received. “I chose the right surgeon,” he says. “Dr. Maxwell is extremely conscientious. I know I’m in good hands, and I’m determined to get myself better with his help.” While Mr. Benko sees an internist and other specialists closer to his home near Toms River, he says he will always make the trip to Philadelphia to see his surgeon of choice.