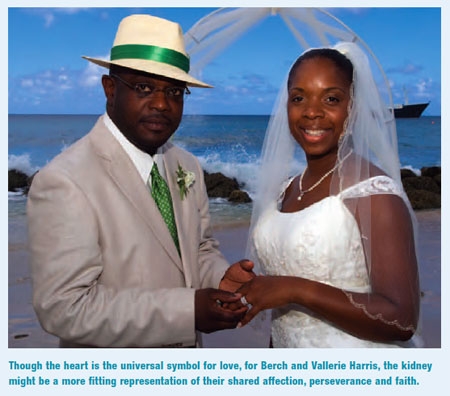 Philadelphia is a competitive community for kidney transplantation, and yet Jefferson’s 2009 numbers were impressive: 93 kidney and kidney pancreas transplants. “Thirty-two of these transplanted organs were from living donors,” says Associate Professor Carlo B. Ramirez, MD, FACS. “The percentage of living donors grew by 19 percent last year, while the percentage of deceased donors remained the same as the previous year.”

Berch Harris is a Jefferson patient who was fortunate to know a donor with whom he was a good match—his wife. He met Vallerie Armstrong in 2002 when he started hemodialysis at a center where she worked. Three years later, Berch had regained kidney function on two separate occasions, and he stopped by the center with information about a product that had helped him. Vallerie gave him her number—it was her last day of work there. They started dating in 2006, began doing at-home dialysis the following spring and married in Berch’s native Barbados on December 8, 2007. By that time Vallerie had been tested and deemed a match with Berch. With his history of regaining function, Berch remained optimistic that his kidney would once again kick in. But those hopes were dashed when doctors found a cancerous tumor on his left kidney. That’s when he and Vallerie knew it was time to get serious about transplantation.

After having his left kidney removed in July 2008, Berch and Vallerie moved forward with their plan to pursue live donor transplant. In February 2009, Costas Lallas, MD, performed a robotic nephrectomy on Vallerie and Dr. Ramirez (whom she describes as “a fabulous human being”) transplanted the kidney to Berch. “We’re very blessed that we have been afforded this opportunity,” says Vallerie. “Life’s just better now, and will continue to get better.”

Dr. Ramirez explains that, as one of 6 kidney transplant programs in the city of Philadelphia, Jefferson strives to maximize its patients’ chances of receiving a donor kidney. One key to expanding Jefferson’s transplant list is Outreach and Education Coordinator Kim Phillips, RN, BSN, CCTC, who goes out to nephrology practices around the Delaware Valley, to build relationships and coordinate meetings with Jefferson surgeons. “This enables us to get know the nephrologists who refer patients to us,” says Dr. Ramirez, “and it fosters good communication. The day after a transplant I always call the referring nephrologist to let them know how their patient is recovering,” he notes. “I find that keeping in touch like this means a significant amount—as it does to me with my own patients.”

For more information about the Kidney Transplant Program visit:http://www.jeffersonhospital.org/transplant/kidney