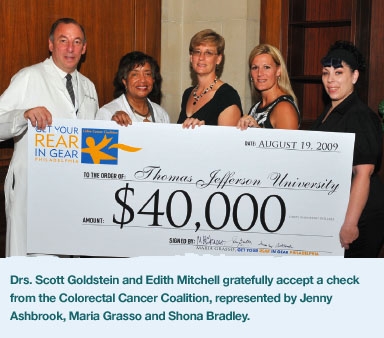 Maria Grasso was stunned when her father, Frank Hepperlen, was diagnosed with stage 4 (advanced) colon cancer in 2005. After 10 months under the care of Scott Goldstein, MD, Associate Professor of Surgery, and Jefferson oncologist Edith Mitchell, MD, Mr. Hepperlen lost his fight with the disease. “The tragic reality of colorectal cancer—the second most-fatal kind of cancer,” Dr. Goldstein says, “is that it often goes undetected until it has spread and is more difficult to treat.”

Ms. Grasso had also lost her maternal grandfather to colon cancer in 1979 and was eager to support Jefferson in fighting this disease. “When I learned that some 90 percent of colorectal cancer is treatable,” says Ms. Grasso, “I felt an obligation to make a difference in the lives of those who still had time on their side.” She decided to partner with the Colorectal Cancer Coalition, which already sponsored a fun run/walk in several cities. The first annual Philadelphia “Get Your Rear in Gear” event was held March 22 on Fairmount Park’s West River Drive. With more than 1,600 participants and 50 teams, it was Colon Cancer Coalition’s largest inaugural event to date. Other event co-chairs were Shona Bradley, and Jenny Ashbrook, whose brother Tony Snow, former White House Press Secretary, fought a very public battle with colon cancer; The Children’s Run was named in his honor. Mayor Nutter, the Honorary Chair, helped kick off the run, along with NBC 10 Meteorologist Bill Henley. Many cancer survivors took part in the event, wearing bright blue “Super Survivor” shirts so they stood out in the crowd.

Of the ninety-seven thousand dollars raised at the event, forty thousand dollars will support patient care and colorectal cancer research initiatives in the Department of Surgery and the Kimmel Cancer Center. Ms. Grasso’s goals are to increase screening, treatment, and prevention. “I’m confident that the funds we raised will go directly to the patients, including the hardest cases as well as providing colonoscopies to underserved populations,” she says. According to the Prevent Cancer Foundation, disease affects a disproportionately high number of Native Americans, African Americans, and Hispanics, who are encouraged to begin screening at age 45.

Ms. Grasso and her co-chairs are gearing up for the 2010 event on March 21, with Jefferson as a sponsor. For more information, go to http://www.getyourrearingear.com

For more information, or to make a gift to the Department of Surgery, please contact Lara Allan Goldstein at 215.955.8797 or Lara.Goldstein@jefferson.edu.