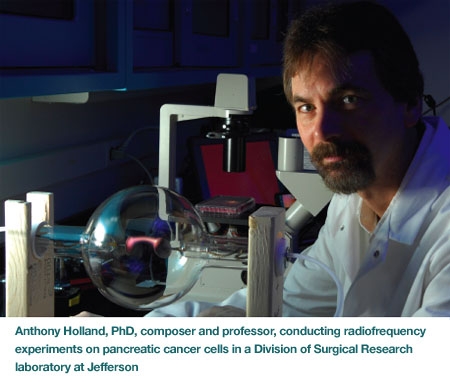 In medical research—like in all areas of innovation—it is impossible to predict where the next great idea might come from. The Department of Surgery recently hosted a researcher who is investigating an unusual potential cancer treatment: Anthony Holland, PhD, a renowned composer who has conducted at Carnegie Hall and has been teaching at Skidmore College for 27 years.

Since early in his career, Dr. Holland has been interested in physics and acoustics. “Years ago I read a book [about] a frequency machine that was capable of destroying microorganisms if it was tuned to just the right frequency.” This made sense intuitively to Dr. Holland; each semester he taught his students to be careful about conditions that can create sound that travels at a particular wavelength, which can develop a “resonant frequency.”

Dr. Holland had audited courses on microbiology in the past. “I learned to use microscopes and to grow and safely keep bacteria—and later cancer cells—in an incubator.” Dr. Holland was able to gather the necessary electronic components and build a frequency machine. For fifteen months he ran test frequencies on harmless, easy-to-obtain microorganisms (paramecium and blepharisma). “I began to try different frequencies, and at first nothing happened. Then I tried putting more than one frequency into the organism simultaneously.” Then a light bulb went on for Dr. Holland. “If I added one additional frequency, in a special relationship to the first frequency, I’d be creating more power and have a better chance at landing on the frequency necessary to change the organism,” Dr. Holland says. “When I added the eleventh harmonic, I looked through the microscope and discovered that the microorganism had shattered. It reminded me of how a crystal glass shatters when a soprano hits just the right note.”

As luck would have it, in 2008, Dr. Holland attended a Skidmore Alumni Day presentation on pancreatic cancer by his former student Jonathan Brody, PhD, Assistant Professor in Jefferson’s Division of Surgical Research. Following the presentation, Dr. Holland invited him to watch his video of the cells exploding. After several minutes, Dr. Brody asked, “Could you blow up cancer cells like that?” Dr. Holland said, “I don’t know, but I’d like to try.” Dr. Brody then arranged Dr. Holland’s mini-sabbatical in the Department of Surgery at Jefferson. “Jefferson has been extremely openminded throughout this process, which is the ultimate test of a research institution,” says Dr. Holland. “I assumed that physicians and other researchers would think it was a nutty idea,” he confesses. “But to the contrary—everyone I encountered realized the potential. I have never experienced such a wonderful reception of new ideas in my entire professional life.”

“Dr. Holland is an extraordinary man,” says Dr. Brody, who has been impressed by his work since he was his student in the 1990s. “and we need extraordinary people working together from many angles to fight this devastating disease.” Preliminary results suggest that Dr. Holland’s device causes changes in the size and shape of pancreatic cancer cells. “This reflects that we’re in the right ballpark,” he says, “that the frequency could affect cells as to destroy them.” Dr. Holland was invited back to Jefferson in August to repeat two key experiments, and he reports that highly technical quantitative analysis indicates some promising results.

Dr. Holland is going on sabbatical from Skidmore this January, and plans to continue (and ultimately publish) his research. “When people ask me what kind of music I’m composing now,” he says, “I tell them I’m writing music for microorganisms and cancer cells. But what makes this piece different, is that if I do it right, it won’t be enjoyable to the audience. It will do them in.”