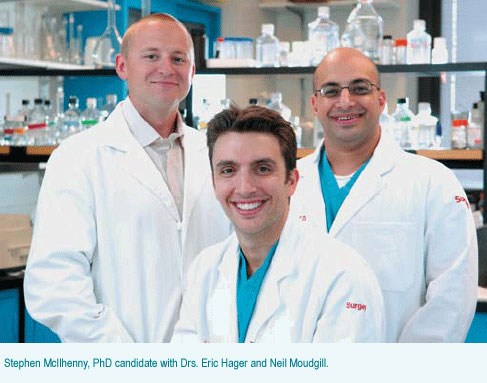 Paul DiMuzio, MD, directs the Vascular Tissue Engineering Laboratory within the Department of Surgery at Thomas Jefferson University. "The overall goal of our research is to develop a durable blood vessel replacement for those patients who do not have enough of their own tissues for heart or leg bypass surgery or hemodialysis access. We combine tissue engineering techniques with adult stem cell technology to make such a graft," explains Dr. DiMuzio. Specifically, the researchers repopulate a cadaver blood vessel with the patient's own stem cells (isolated from their fat) that have been changed into endothelial cells.

Recent work has focused on the effects of fluid-induced shear stress and genetic manipulation on the differentiation of the stem cells. The investigators are developing methods to more effectively change the stem cells into endothelial cells by altering their environment as well as their genetic composition. The following research trainees have investigated these issues under the mentorship of Dr. DiMuzio:

The overall goal of our research is to develop a durable blood vessel replacement for those patients who do not have enough of their own tissues.

During his research year, Eric Hager, MD, a 4th year resident, studied how fluid flow influences stem cell adhesion to the vascular graft. Dr. Hager successfully demonstrated that shear stress improves the ability of stem cells to adhere to grafts secondary to up-regulation of integrin expression (proteins on the cell surface necessary for cell adhesion). Dr. Hager presented this work at the Society of Vascular Surgery's National Annual meeting in June, 2008 in San Diego - a presentation highlighted in a press release at the meeting.

Neil Moudgill, MD, another 4th year resident, evaluated the role of shear stress on stem cell differentiation. He found that shear stress significantly up-regulated certain endothelial cell-specific proteins due to stimulation of a specific differentiating pathway. His work was presented at the Annual Resident Research Competition at the University of Rochester in April, 2008. Neil's presentation was picked as one of three winners in this national competition.

While surgical residents spend one year in the research laboratory, Stephen McIlhenny, BS, is currently in his fourth year as a PhD candidate in Jefferson's Tissue Engineering and Regenerative Medicine (T.E.R.M.) program. Stephen designed a novel vascular bioreactor in which the stem cell vascular graft is created and cultured. He successfully demonstrated that a gradual increase in shear stress was critical to the retention of stem cells on the graft, work that he presented at the 2007 Biomedical Engineering Society (BMES) Annual Meeting in Los Angeles.

Additionally, Stephen recently genetically manipulated the stem cells to express endothelial nitric oxide synthase (eNOS), a gene critical for function of endothelial cells. Most importantly, Stephen demonstrated that his manipulation has led to the release of nitric oxide (NO), a molecule critical to blood vessel function and health. Stephen's research on stem cell eNOS transfection will be presented at the Tissue Engineering and Regenerative Medicine International Society (TERMIS) meeting in December 2008.

Under the sponsorship of Thomas Tulenko, PhD, Director of the Division of Research, and Dr. DiMuzio, Stephen has been granted an American Heart Association Pre-doctoral Fellowship.