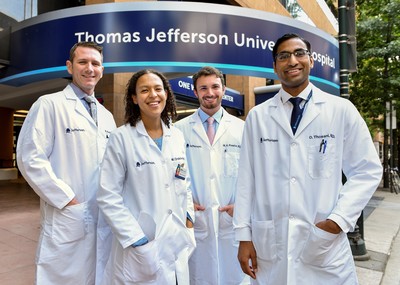 When Hahnemann Hospital announced at the end of June that it was closing its doors, 571 residents and fellows were suddenly facing an uncertain future. By July 5, the Thomas Jefferson University Department of Surgery had conducted interviews with 18 soon-to-be-displaced residents and extended invitations to four: William Preston, MD (PGY1), Darshak Thosani, MD (PGY2), Madison Crutcher, MD (PGY3) and Robert Kucejko, MD (PGY4). All four accepted and are now active members of the Jefferson surgery program.

“We had been hearing rumors about Hahnemann for at least 15 years, so the closure wasn’t a complete shock,” explains Residency Program Coordinator Donna Guinto. “However, it is highly unusual for residents to move to a new institution. The last time we hired a displaced resident was when St. Vincent’s Hospital in New York City closed in 2010.”

Guinto praises all four residents for making a smooth transition to Jefferson. She notes that the ability to stay in Philadelphia was very beneficial for all of them. That was especially true for Dr. Crutcher, whose significant other was also a Hahnemann resident (he found a new home at Cooper University in New Jersey).

“Everyone has been very nice and welcoming,” says Dr. Crutcher. “Jefferson got us started as soon as possible so there has been no disruption in our training.”