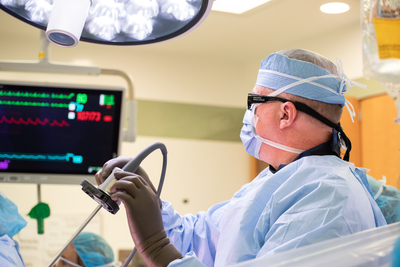 As Director of Robotic & Minimally Invasive Cardiac Surgery at Jefferson, T.Sloane Guy, MD, MBA, has a big passion for small incisions. Dr. Guy performs all aspects of adult cardiac surgery, with a focus on mitral valve disease and hypertrophic cardiomyopathy (that is, when part of the heart becomes thickened without an obvious cause). He is particularly well known for his experience in using robotic cardiac surgery to treat these and other conditions. One of the most innovative procedures is totally endoscopic robotic mitral repair. The procedure – the smallest-incision open-heart surgery performed in the world today – relies on a 12-millimeterworking port and a percutaneous cannulation. In other words, a system of catheters is inserted through the skin via punctures rather than incisions to achieve a heart-lung bypass during the procedure.

“With endoscopic robotic mitral valve repair, we make five small incisions in the right armpit area: four that are 8 millimeters, or slightly larger than the diameter of a pencil, and one that is 12 millimeters, or about the width of an average pinkie finger,” Dr. Guy explains. “This approach provides significant advantages versus traditional sternotomy, which requires the breastplate to be divided, and non-robotic or robotic ‘port access’ approaches. With our approach, incisions are very small and there is no need for painful rib spreading. We essentially slip between the ribs, which is less painful.”

Dr. Guy further explains that the incisions are so small that the surgeon cannot perform any of the operation by looking directly through the ports. The entire operation is performed using the robotic system with help from the bedside surgical assistant.

“This is how I define ‘totally endoscopic’ robotic mitral valve surgery,” he says, noting that most of these patients leave the hospital within one to three days. In addition, most return to work much sooner than they would following traditional open-heart surgery, often as early as two weeks.

Before joining Jefferson in June, Dr. Guy served as Director of Cardiac Robotic Surgery at Weill Cornell Medicine/New York-Presbyterian Hospital in New York. However, he has long had ties to Philadelphia, having completed his medical and MBA degrees and his general surgery residency, cardiothoracic surgery research and clinical fellowships at University of Pennsylvania. He also draws on the knowledge gleaned from a long and distinguished career in the U.S. Army – experiences that have shaped how he views teamwork.

“Robotic heart surgery requires teamwork, cooperation, collaboration, technical skills, and tremendous communication skills. Our dedicated team does every case together and follows strict protocols. Our team communicates and functions like other high-performance teams,” Dr. Guy says. “In building this team at Jefferson, I have drawn not only from experiences with similar civilian programs but also from the time I spent building military trauma surgery teams in Iraq and Afghanistan. Many civilians mistakenly think military culture is all ‘top down,’ but it’s actually far more collaborative than most civilian organizational cultures.”