Three Recent Gifts to the Department of Surgery 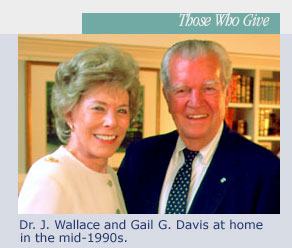 The couple were longtime residents of Gladwyne, PA; Dr. Davis passed away in 2002, and his wife Gail in May of 2006. Dr. Davis had a long and devoted relationship with Jefferson. His father, Warren B. Davis, MD, founded the Jefferson plastic and reconstructive surgery practice in 1913, and Wally was born in his offices at 135 S. 18th Street (where the practice remained until 1996). A 1942 graduate of Jefferson Medical College, Wally is described as the "quintessential Jefferson surgeon." He retired in 1988 but remained an extremely influential figure for his friends and colleagues alike. John Moore, MD, describes him as a "guiding light." "I inherited several of his patients," Dr. Moore explains, "and from bank presidents to the most underprivileged-everyone spoke of Wally with the same fondness, gratitude, and admiration. He was a consummate gentleman and a unique person who is greatly missed."

The 25th Century Foundation has made a significant contribution to the Pancreatic and Related Cancers Surgical Research and Education Fund. Lin Buck, a board member of the foundation, lost her mother Ann Hosterman to pancreatic cancer, just six weeks after her diagnosis. This loss inspired Lin and her husband Jim, whose parents established the foundation in 2000, to support Jefferson's efforts under the leadership of Charles J. Yeo, MD, a renowned alimentary tract surgeon and the Samuel D. Gross Professor and Chair of Surgery. The grant will support the development of Jefferson's Pancreatic Cancer Website, to provide patients and their families with tools to learn about pancreatic cancer and make informed decisions.

Anton H. Rosenthal (Tony) and Ruth E. Ganister, his wife and partner in the West Chester law firm of Rosenthal and Ganister, have pledged $25,000 to the Division of Colon and Rectal Surgery. The commitment is made in grateful recognition of the care and attention that Gerald Isenberg, MD, provided to Tony after his diagnosis of colon cancer. Tony and Ruth are also partners in the Camden RiverSharks and Long Island Ducks minor league baseball teams.

To make a gift to the Department of Surgery, please contact Lara Allan Goldstein at 215-955-8797 or Lara.AllanGoldstein@Jefferson.edu