Pancreatic Cancer: When the Stakes are High . . .

Pancreatic cancer was once considered a "death sentence," but with advances in surgical, endoscopic, and oncologic treatments, pancreatic cancer patients are now often getting a second chance. 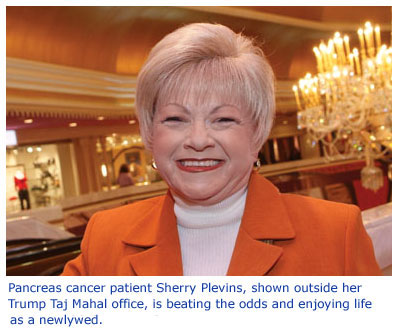 Sherry Plevins, 59, an avid walker, was healthy her entire life, and even had 250 hours of unused sick time at her job as Administrative Assistant to the Chief Financial Officer of Trump Entertainment Resorts in Atlantic City. But an ongoing stomachache followed by yellowed eyes drove her to a local ER. She developed complications from a procedure, "coded," revived, and was in a coma for a week before she was diagnosed with a neuroendocrine tumor on her pancreas.

Sherry was referred to Thomas Jefferson University Hospital, where she underwent a mini-Whipple procedure, performed by Charles J. Yeo, MD, the Samuel D. Gross Professor and Chair of Surgery. This procedure, an improvement upon the classic Whipple procedure, is a modified pancreas resection that preserves the entire stomach, the pylorus, and several centimeters of the upper duodenum. This less radical procedure can result in a shorter hospital stay and fewer complications. Following surgery, Sherry was only in the hospital for six days. Sherry comments that, throughout the entire process, "the Jefferson staff was extremely kind, reassuring, compassionate. They responded to a telephone question within 5 minutes. That's the Jefferson way."

In Bristol, PA, Bill West also had cause for concern, even without a single symptom. After losing his twin brother Joe to a rare form of cancer, this 43-year-old electrical engineer was compelled to get tested. Initially no one (medically) felt that he needed to be tested because he was healthy and symptom-free. Due to his persistence, he did undergo a series of tests and procedures that ultimately revealed a pre-cancerous pancreatic cyst, which Dr. Yeo removed by performing a mini-Whipple procedure. "I just wanted to be checked and it was a good thing. Another six months, and it would have been a different story. I am thankful every day for Dr. Yeo and his team because they saved my life, as did my twin brother Joe."

To read more about Sherry, Bill and other patients, visit: www.jeffersonhospital.org/pancreas

On October 31, 2006, Jefferson hosted the first annual reunion of its pancreatic and related cancer surgery survivors — a group of over 80 patients and family members who came together to tell their stories, share their thanks, and learn about the progress being made at Jefferson.

Charles J. Yeo, MD, Samuel D. Gross Professor and Chair of Surgery, welcomed the attendees, most of whom he had personally seen through grim diagnoses to healthy outcomes. The day included a luncheon and presentations by faculty members on the latest research and clinical trials in pancreatic cancer.

While both of the patients in the cover story had a "mini-Whipple", their tumors were quite different. "The good news is that both have returned to the normalcy of everyday life," says Dr. Yeo. "With the development of new diagnostic tests, improved surgical procedures, and more individualized drug therapies, the outlook for patients with pancreatic cancer is ever brighter."