Colonel Darnell Waun has been a critical care nurse for all 28 years of his career in the Air Force Nursing Corps, but only after a 2005 liver transplant at Jefferson has he fully experienced life, as he says, on "both sides of the bed rails." 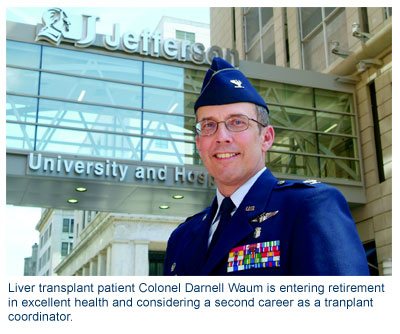 In 1998, while serving as Commander of the 8th Medical Operation Squadron and Chief Nurse at Kunsan Air Force Base, Korea, Col. Waun was diagnosed with Primary Sclerosing Cholangitis (PSC). This disease, which causes the bile ducts to narrow through inflammation and scarring, progresses slowly, resulting in a 7-to-10 year life expectancy. After undergoing a partial liver resection, Col. Waun enjoyed many years of relative good health, even flying with the Air Force Air Vac Unit until 2003.

In June 2004, Col. Waun was stationed at Dover Air Force Base (AFB) in Delaware – an assignment that he highlights as a "twist of fate," as it ultimately brought him to Jefferson. He knew Jefferson oncologist Edith Mitchell, MD (a former reservist), who referred him here for a hepatology assessment. Symptoms related to PSC recurred, and he was placed on the transplant wait list on Valentine's Day 2005. "The waiting is the hardest part," he explains, "because there may be no end date. Your life revolves around staying close to the transplant center." He grew sicker, ultimately having to sleep leaning over the couch so his abdomen would not fill with fluid.

"I’d like to be able to make a similar kind of difference in the lives of others."

On October 29th, 2005, the Colonel learned he was the back-up recipient for a liver. "It was a huge rush," he says, "but I also was aware that this could be my very last procedure." On Halloween Day, a matching liver became available, and Cataldo Doria, MD, performed the surgery. Col. Waun was discharged within 16 days and back at work on January 3, 2006, as the Commander of the 436th Medical Group at Dover AFB. He has since communicated with the donor's family, who has experienced both sides of transplant surgery. The donor's brother had received a heart transplant.

Col. Waun retires this summer from the Air Force, but is considering becoming a transplant coordinator. "I'd like to be able to make a similar kind of difference in the lives of others," he says, "although I firmly believe that there is also something bigger that plays a hand."

"Every liver transplant is extremely difficult. However, Col. Waun's 8-hour surgery stands out as one of the most complex of my career. His previous liver surgeries - a liver resection, where part of the liver is removed, and a bile duct reconstruction — contributed to changes in how the organs were arranged in the abdomen. The liver becomes very hard, as the venous system that brings blood to the tissue has become obstructed, and the walls of the veins enlarge. Every time a surgeon opens and closes the abdomen, there may be inflammation and adhesions. In subsequent procedures you are not provided with the usual anatomical reference points and must envision how previous surgeries modified the anatomy. In some cases previous surgeries can cause a patient to be deemed untransplantable. Col. Waun's case demonstrates that — even against the greatest odds — it is possible to save a life through a transplant. As a transplant center, Jefferson continues to embrace even the most difficult cases."