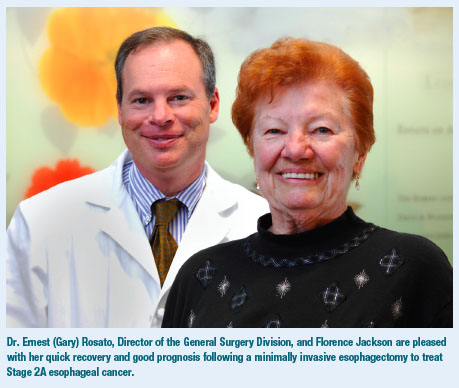 When Florence Jackson, 73, had some difficulty swallowing her food one evening, her husband insisted she see her doctor. She mentioned it at her six-month checkup, and notes that years earlier she had suffered from acid reflux, which is known to be a possible cause of esophageal cancer. A barium swallow test revealed an obstruction in her esophagus.

In southern Delaware, where Florence lives, there was no facility that could do an endoscopic ultrasound. She was referred to Jefferson, where she was treated by Ernest (Gary) Rosato, MD, Director of the General Surgery Division, and Associate Professor Benny Weksler, MD, MBA, a thoracic surgeon. She was diagnosed with Stage 2A cancer of the esophagus, but the team offered her an excellent treatment plan. Prior to any surgery, Florence underwent chemotherapy and radiation therapy at the Tunnel Cancer Center in Delaware to shrink the tumor as much as possible. Then, at Jefferson, she underwent a laparoscopic esophagectomy, which is an innovative, minimally invasive surgery with a relatively short recovery.

Jefferson is the only area hospital offering a unique team approach which provides the patient with the expertise of two surgeons trained in minimally invasive surgery (MIS). Dr. Weksler operates on the part of the esophagus in the chest and Dr. Rosato operates on the portion in the abdomen.

“My experience with Jefferson was none other than outstanding,” says Florence. “In addition to the kindness and respect for me as an individual, it was a great comfort to have such an experienced, compassionate team with a successful track record.” Florence’s stay in the hospital was only 11 days, and she was pleased that she was “back to normal” within just 10 days of returning home.

Jefferson is also the only hospital in the Philadelphia region performing a high volume of laparoscopic esophagectomies— 25 during 2008, and the Department expects to double that number in 2009. A study of those cases demonstrates a decrease in morbidity over open surgeries. Dr. Rosato explains the benefits of this procedure: “With conventional ‘open’ surgeries, the incisions are large and painful, and the hospital stay is longer,” he says. “Laparoscopic surgery results in shorter recovery and patient hospitalization.”

Dr. Rosato also emphasizes Jefferson’s commitment to the latest training and technology. “We have steadily increased our volume of minimal invasive surgeries over the last four years,” he explains, “and we are now training residents and a fellow in the specialty.” Jooyeun Chung, MD, the current Minimally Invasive Surgery Fellow and a graduate of Jefferson’s residency program, has already built an impressive record with more than 30 minimally invasive surgeries for the esophagus. “We are aggressively taking the lead by developing one of the most experienced MIS/GI/Thoracic capabilities in Philadelphia,” says Dr. Rosato, “and are setting the tone and pace for what will become the future of general surgery.”