Traumatic Brain Injury (TBI) is the result of sudden trauma causing damage to the brain. TBI can occur when the head strongly and abruptly changes direction or contacts an object, or when an object penetrates the skull and brain tissue. (Figure 1 – TBI). CDC estimated that in 2010, TBI, alone and in conjunction with other injuries, accounted for approximately 2.5 million ED visits, hospitalizations, and deaths in the United States. Children aged 0–4 years, adolescents aged 15–19 years, and, most significantly, adults aged 75 years and older are the most likely to sustain a TBI and seek medical care1. The leading cause of non-fatal TBI in the U.S. is falls and the leading cause of TBI-related fatalities is motor vehicle accidents2.

As a heterogeneous condition, TBI is conventionally categorized as mild, moderate, or severe. The most useful classification system is the Glasgow Coma Scale (GCS) which is based on level of consciousness as assessed by eye, motor, and verbal performance. A GCS score of 13 to 15 classifies a mild TBI, 9 to 12 a moderate TBI, and a score of 3 to 8 defines a severe TBI (sTBI). Each year, the direct and indirect medical cost of TBI is nearly $76.5 billion, with 90% directed at severe TBI3.

Although little can be done to reverse the initial, or primary, brain injury caused by trauma, care is directed at stabilizing the patient and preventing further, or secondary, brain injury. Concerns of delayed non-mechanical damage include swelling, inadequate oxygenation, lack of autoregulation, and metabolic dysfunction. Elevated intracranial pressure (ICP), often the result of increasing mass effect from hematomas and contusions, diffuse cerebral edema, or hydrocephalus, is an important promoter of secondary brain injury and is associated with worse neurological outcomes in patients after TBI. Consequently, medical and surgical efforts attempt to normalize ICP in order to maintain cerebral blood flow and prevent parenchymal death. (Figure 2 and 3– ICPmonitor1 and 2). In the past 5 years, three landmark trials have explored the beneficence of three individual techniques for mitigating secondary brain injury associated with intracranial hypertension. Although the following investigations do not isolate and then evaluate ICP treatment, they do smear the guidelines of practice for approach and management of sTBI. 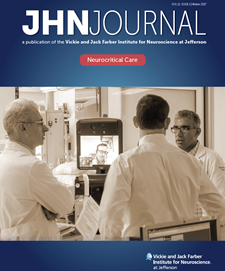