Among the illustrious Jefferson surgeons whose portraits hang on the 6th floor of the College Building is Philip J. Wolfson, MD. The 2002 Jefferson Medical College class commissioned this portrait to recognize Dr. Wolfson's excellence as a teacher, role model, and mentor. The painting now serves as a memorial, after Dr. Wolfson's untimely passing in late August 2007. The image captures his kindness, generosity, wisdom, and gentle spirit. 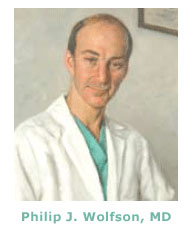 During his 25 years at Jefferson, Dr. Wolfson served as Chief of Pediatric Surgery and Director of Undergraduate Medical Education (UME) for the Department of Surgery. A nationally recognized educator, he introduced several new surgical techniques and established a neonatal program — among the first in the nation — for extracorporeal membrane oxygenation (ECMO), which dramatically increased the survival rate for newborns with lung problems.

As Chair of the Jefferson Medical College Curriculum Committee — a position he held for 8 years — Dr. Wolfson worked closely with Susan Rattner, MD, Senior Associate Dean for UME, to redesign the medical school curriculum. She remembers him as a man "whose work reflected his belief in excellence in medical education, in the Golden Rule," she reflects. "As passionate as he was about teaching, he was also a devoted learner. He treated his students as colleagues."

Dr. Wolfson's tireless energy and initiative extended well beyond Jefferson. A frequent lecturer and prolific author, he received numerous awards, including the 1999 Outstanding Teacher Award from the Association for Surgical Education (ASE). He also served as Chair of the USMLE Step 2 Surgery Committee for the National Board of Medical Examiners (NBME) and served as President of ASE from April 2007 until his death.

To honor Dr. Wolfson and the hundreds of lives he touched, Jefferson Medical College established the Philip J. Wolfson, MD, Memorial Education Fund to award a prize to a medical student who has demonstrated exceptional professionalism and leadership. The first student prize will be awarded this spring to a member of the Class of 2008 — the last to have had the privilege of knowing Dr. Wolfson personally. Additionally, the Fund could support a lectureship in medical education, named in Dr. Wolfson's honor, to be presented at the annual Jefferson Medical College Curriculum Retreat.

For more information, or to make a donation in Dr. Wolfson’s memory, please contact Lara Allan Goldstein at 215-955-8797 or Lara. AllanGoldstein@jefferson.edu.