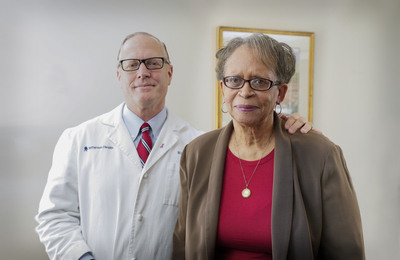 Over 6 years ago, Mary Johnson was referred to Dr. Wilbur Bowne with a rare and concerning diagnosis - pseudomyxoma peritonei (PMP)

Six years ago, when Mary E. Johnson began experiencing a change in bowel habits, she didn’t hesitate to schedule an appointment with her primary care physician, Katie M. Dougherty, DO. Now 73, Johnson recalls hoping Dr. Dougherty would prescribe medication and send her home. Instead, the physician ordered a battery of tests that led to a serious and rare (approximately one in a million) diagnosis: pseudomyxoma peritonei (PMP), a slow-growing cancer of the appendix.

In 2019, Kathleen Neider, now 66, was suffering from recurring pains in her abdomen. After months of pushing through the pain, Neider’s sister, a nurse, insisted she be seen at the hospital. After testing by a gastroenterologist, she, too, was diagnosed with cancer of the appendix. Neider was initially treated with bowel surgery followed by a course of chemotherapy. After a year of remission, follow-up scans showed cancer recurrence on her ovaries and near the site of the earlier resection.

Historically, patients with PMP and other advanced abdominal cancers faced a poor prognosis, with treatment largely focused on alleviating symptoms rather than preventing disease progression and increasing survival rates. Johnson and Neider were able to take advantage of an effective treatment option: cytoreductive surgery with hyperthermic intraperitoneal chemotherapy (HIPEC), a newer treatment available at only a few institutions in the Delaware Valley.

Both women underwent the procedure with surgical oncologist Wilbur B. Bowne, MD, who has been performing this treatment for over a decade and established the Jefferson HIPEC Program in January 2020. As Dr. Bowne explains, HIPEC surgery is a two-part treatment. The first step is cytoreductive surgery to remove all visible tumors in the abdominal cavity. The second part involves administering high doses of heated chemotherapy to eliminate remaining microscopic cancer cells. The solution is circulated throughout the patient’s abdomen and pelvis for at least 90 minutes at a temperature of 41 to 43 degrees Celsius (106 to 109 degrees Fahrenheit).

“That’s the range that scientific research has shown is optimal for chemotherapeutic drugs to penetrate and kill any remaining cancer cells,” says Dr. Bowne. “This regional perfusion enables us to deliver a much higher concentration of chemotherapy than a patient could tolerate in the bloodstream.”

HIPEC is an effective treatment option for selected patients with appendiceal/PMP cancer as well as other abdominal conditions, such as peritoneal mesothelioma and cancer of the colon, ovaries and stomach.

HIPEC is a lengthy and complex procedure and not suitable for every patient (Johnson’s and Neider’s HIPEC procedures lasted 13 and 10 hours, respectively). Dr. Bowne explains that a patient typically needs to demonstrate a favorable treatment response to traditional chemotherapy, along with sufficient stamina to undergo and recover from the procedure.

Two months after HIPEC treatment, Neider is still navigating her recovery and praises Dr. Bowne and the team for her care.

“Dr. Bowne and his staff have been amazing. I have called him, and he always takes my calls and answers my questions. We always decide together what we’re going to do,” she says.

For Johnson, it’s been over six years since she met Dr. Bowne and underwent her HIPEC procedure. She remains “ecstatic” about her outcome, adding that she takes minimal medication and is “feeling good.”

“I thank God that the scientific and medical brains came together to save my life,” Johnson says.