A Wall of Honor, Hope and Healing: Department of Surgery Recognizes Generous Benefactors 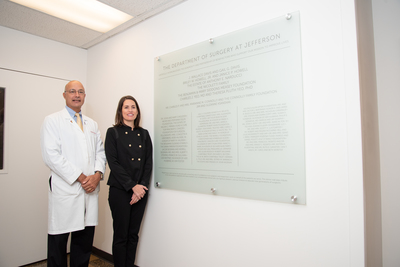 Stroll through the sixth-floor halls of Jefferson’s Curtis and College buildings and you will see portraits of the legends who have made an indelible imprint on American medicine and surgery. These portraits include Thomas Mütter (the father of American Plastic Surgery), John Chalmers DaCosta (a master educator) and John H. Gibbon, Jr., inventor of the heart-lung machine.

Now the names of another group of legends adorns the walls: some of the most generous benefactors of the Department of Surgery. Installed in October, the donor wall pays tribute to those whose support has fueled the Department’s compassionate clinical care, rigorous research and ongoing mission to educate new generations of surgeons.

“These generous supporters have played a vital role in driving high-quality care and groundbreaking innovations in diagnosis and treatment,” says Charles J. Yeo, MD, the Samuel D. Gross Professor and Enterprise Chair of Surgery at Jefferson Health. “It’s an honor for us to deliver this enduring recognition of their contributions. We also hope it will inspire others to express gratitude for care they or their loved ones have received at Jefferson.”

Thomas Jefferson University President and Jefferson Health CEO Stephen K. Klasko, MD, MBA, recently announced Reimagine: The Campaign for Jefferson, a plan to propel the university and health system forward. The vision focuses on making bold leaps in people, spaces, communities and discoveries, and support from grateful patients is a key to making it happen.

As Kelly Austin, Assistant Vice President of Development for Medicine/Surgery, explains, research by the National Institutes of Health has shown a relationship between giving and healing.

“Many patients and families are motivated to give based on experiences with clinicians who cared for them and a desire to support their research or educational priorities,” she says. “The Reimagine campaign reinforces that giving should be transformational, not transactional. Patients who give often find that it is very rewarding, and that it provides meaning and closure following difficult circumstances.”

With the new donor wall, the Department of Surgery is commemorating the growing list of donors—including many grateful patients – and hopes to encourage others to experience the healing power of philanthropy.

To learn more about how you can make an impact at Jefferson, contact Kelly Austin at 215-955-6383 or kelly.austin@jefferson.edu.